The Rhetoric of Urban Planning 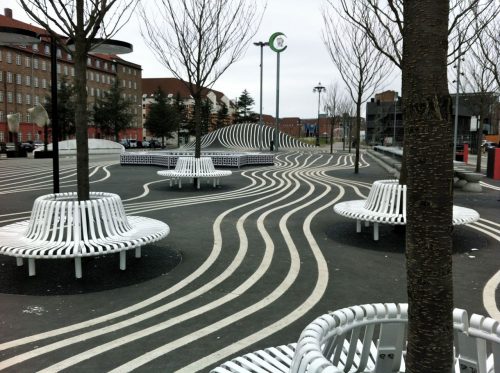 A lot of different terms are used in the rhetoric field of urban planning. One concerns the national difference between the German „Quartiersmanagement“ and the Danish „kvarterplan“ (both terms are related to, in English, the idea of urban renewal). In spite of the different rhetoric, is there an actual difference? Compared, how do the two terms relate to urban development processes?

I often take bus M19 in Berlin. It was my former connection between my flat and the western located Technische Universität Berlin. A good day is, when a seat in this double-decker on the second level in front is vacant. Just before you turn for Kulmer Straße/Bülowstraße in direction of KaDeWe, you get a glimpse of this building: 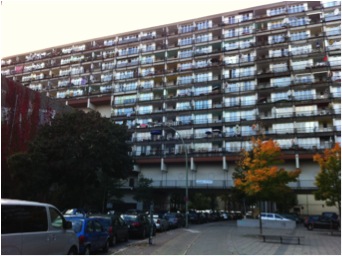 This is the Pallasseum (Pallasseum Wohnbauten KG), formerly called „Wohnen am Kleistpark“, in the area of Berlin Tempelhof-Schöneberg; an extravagant 1977 project by the architect Jürgen Sawade. According to the architect, the building should integrate itself into the existing urban patterns, among others infrastructural and historic: 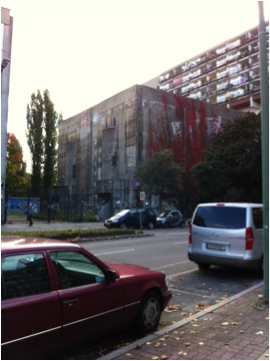 Quickly, the apartment block was popularly re-named „Sozialpalast“ (“Social Palace”) due to the increasing amount of dwellers on social transfers – mostly with migration background. Therefore, Palasseum has throughout many years been a focus in the Berlinian social development programme called Quartiersmanagement (“quarter management”).

It is interesting what the different terminology in urban renewal says about its method and practice. From its rhetorical composition, I particularly find the term „Quartiersmanagement“ interesting. In comparison with the Danish equivalent „kvarterplan“ (“quarter plan”), it draws a more diverse picture because the difference in terminology forms connotations in different directions. The leading question of the following article will be: Does a difference in rhetoric mean a difference in urban development processes?

In Den Store Danske Encyklopædi (www.denstoredanske.dk), plan is defined as „a map of an area or an outline of e.g. a train schedule“. Its verbal form at planlægge (“to plan”) is associated with “a strategy to achieve predetermined aims”. Further, Management relates to leadership or guidance, which „is the process of completing an activity with help from and through others“ as well as „practised in order to influence an organised group to formulate and work towards the completion of certain aims“.

What I find appealing is the processual aspect of management. In the definitions, I detect a difference between static and process, where „plan/løft“ designates the former and „management“ the latter. What does that mean for the architectural social politics for Copenhagen and Berlin respectively? Do the rhetoric differences mean a difference in their set of objectives?

The Definition of Urban Renewal: A Method of Integration

Urban renewal aims to improve a particular urban quarter, which is stressed physically, economically, socially or culturally. In both Germany and Denmark, it is a project caretaken and financed by governmental units. In Copenhagen, these count the state, the municipality and a variety of committees and in Berlin, the municipality, the Bundesländer programme “Die soziale Stadt” and the European Union are the main actors. According to Quartiersmanagement Berlin, a governmental fraction under Senatsverwaltung für Stadtentwicklung und Umwelt, the set of objectives are as follows:

In comparison, the urban renewal plan for Nørrebro Park Kvarter in northeast Copenhagen developed by the Municipality of Copenhagen in 2002 reads:

improving the ability to handle conflicts

Per definition the terms „kvarterplan“ and „Quartiersmanagement“ seem to strive for the same kind of integration aim. Is there a practical difference?

The Practice of Urban Renewal

According to the municipality of Copenhagen, “Kvarterplan” consists of two plans of action: Firstly, the physic renovation, redevelopment and construction, but also secondly, the development of social sustainable environment. Both plans mean reconstructing backyards, implementing green zones but also arranging places of dialogue, e.g. a local information office and sport activities. This strategy was completed in 2007 and has lead to further substantial development: the new infrastructural project „Superkilen“ by international renowned Bjarke Ingels Group (BIG). The 33.000 m2 rectangular Superkilen was completed in 2011 and contains urban elements imported from a variety of countries. It should symbolize the end of a successful urban renewal and “portray a true sample of the cultural diversity of contemporary Copenhagen” (http://flash.big.dk/projects/suk/). Yet, the project depicts different cultures but does not necessarily integrate them. I will return to this problem in the following. 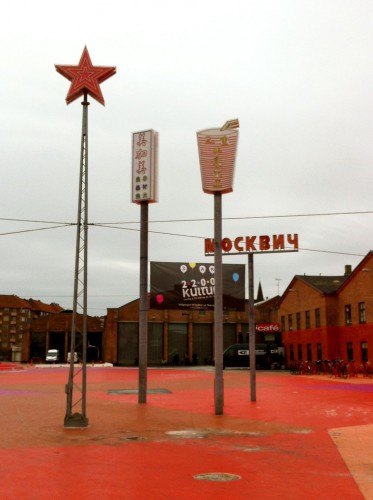 In comparison, “Quartiersmanagement” seem to prioritize not a particular physical environment but the development of a social and cultural sustainable environment; “dialogue” seems again to be the keyword. Within the frames of the different projects, a local bureau is created where the matching of expectations and exchange of experience take place. Noticeable in this connection is the initiative’s usage and emphasis of the word “empowerment”:

This development of empowerment can be detected at Pallasseum Wohnbauten KG. 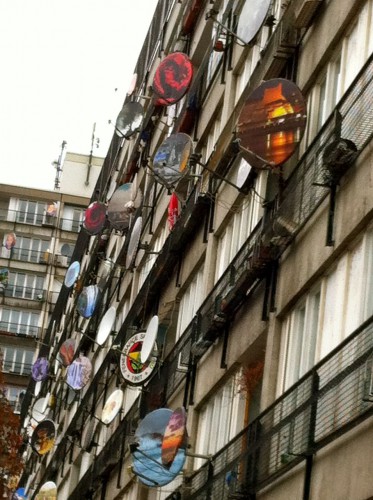 This time, notice the satellite dishes. One can detect the small pictures that decorate them. This is a project financed by Quartiersmanagement Berlin, which offers the dwellers in Pallasseum to choose the picture for their own dish. Some have flowers or bounty beaches, other even family pictures, which means the building has a lot of personalized satellite dishes. This project not only creates a feeling of home in a rather monotonous building structure but also shows the seeds for an interaction between the dwellers and an appropriation of the project by “Quartiersmanagement”. Exactly this form of appropriation processes occurred: today the dwellers, a mix of different cultures, organize a monthly flea market. The satellite dishes are small projects lead not by governmental forces but the dwellers themselves. This have made them aware of the importance of their own say.

When regarding the differences within the two projects, it is further important to remember the differences in the two cities concerning demography, social strata, multiculturalism and particularly, economy. In Berlin, the budget frame from 1999 to 2012 was set to € 260,3 mio. to treat 34 areas and their numerous projects (average € 7 mio. per area), while it in Copenhagen, the single project of Nørrebro Park Kvarter had € 24 mio. alone. Due to greater finances, Copenhagen has the possibility to conduct other types of projects than Berlin. Because its many projects, the latter has to adapt its funds in a much more efficient way. Yet, equals better economy better urban renewal? Can the copenhagenized development plan be seen as a priority of physical changes, while the Berlinian tries to create development from within? Is the difference between plan/løft and management actually a difference between physical facilitation and inter-human empowerment?

Concluding the above analysis, one could ask: Does the rhetoric of urban planning actually change our perception of its achievement?

Still, I find the order in which we label things relevant when defining hierarchies as well as the transfer of power within these. When using the word “plan”, its connotation suggests the method of top-down planning. It is also a terminology defined by another discourse and through other power structures than the ones of the area subject for urban renewal. In spite of its rhetorical connotations, one could also argument that the polysyllabic wording of “Quartiersmanagement” does not naturally adapt to the German tongue including the everyday language of the dwellers. Therefore, it would not easily be appropriated into the language of those, whom the renewal processes actually concern and could likewise appear as a linguistic alien matter

For the urban renewal to be appropriated and the transfer of power structures from the government to the dweller (empowerment) to begin, the first step is the appropriation its language. It is therefore important to be aware of which rhetoric is used and how it is defined, when wanting to create empowerment processes. One could argue that when the rhetoric is defined by the leading power structures, the timescape of linguistic appropriation broadens. For the dwellers to become aware of the meaning of urban renewal when concerning their neighbourhood, a dialogue has to be started. The very base of the two analyzed models of urban renewal is indeed dialogue, but to be able to start an activity as in Pallesseum, this dialogue and its discourse has to be valued due to and adapted to the existing different cultural backgrounds and local discourses of the quarter in question.

Further, Superkilen is a good example of a miscommunicated idea of multiculturalism. In my opinion, the broad palette of colours and urban activities imported from around the world do not create dialogue within the discourse of Nørrebro Park but transfers their own. It is questionable how many of the ethnic minorities living on Nørrebro that consider Superkilen as their own.

In comparison, the project of Pallesseum has shown to produce the exact opposite. The satellite project has transferred the project of urban renewal into the discourse of the dwellers themselves and the project can be considered their own. In my opinion this proves that even though having an abstract definition of urban renewal, it is possible to define urban renewal within the discourse of the dwellers in question and create a dialogue. At Pallasseum, the dwellers are given the responsibility to find out what is better for them and not what looks better according to an political set of standards. Maybe the difference in rhetoric actually means a difference in action?