Presentations of Architecture Then and Now: An Educational Cutback 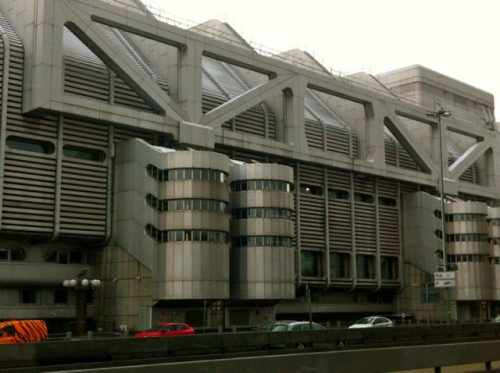 The final presentation of a piece of architecture matters quite a lot. It can be said to closely compete with the importance of the building itself. Apart from its values in the present, the presentation also has a historical factor: How a piece of architecture is presented changes over time but can still play an essential role in its future perception and public certification.

Due to my former commuting between Berlin and Copenhagen as well as present visits in the latter, I hung and hang out quite a lot at Berlin Zentral Omnibus Station (ZOB). The station itself is not a particular piece of architecture and definitely not in comparison with its neighbour on the opposite side of the road: the International Congress Centrum Berlin (ICC Berlin). In comparison with the new building in the Berlinian fair family, the City Cube, its expression but also its presentation differs. This article compares the two types of fair architecture and studies how the rhetoric has changed when presenting architecture.

ICC was designed by architects Ralf Schüler and Ursulina Schüler-Witte and opened in 1979. To be discussed as a piece of high-tech architecture, the ICC stands as an example of an optimistic West-German spirit, if not to say utopian optimistic. In present times, the ICC meets its challenges to legitimate itself and is now threatened by closure. Although in the article „2012 war bestes Jahr in der Geschichte der Messe Berlin“ (in English: “2012 was the Best Year in the History of Messe Berlin”) by the newspaper Berliner Morgenpost (19.12.12) ICC will, contrary to last year’s success, close in the beginning of 2014. The government has released € 300 mio. to renovate the ICC. Yet, the decision of keeping the fair or tearing it down has not been settled.

In this video, the architect Ralf Schüler among others presents the new ICC building of 1979 (03:48-06:23min). With a blackboard and a soft voice, he explains the rather simple „house-in-house“ concept of the ICC. 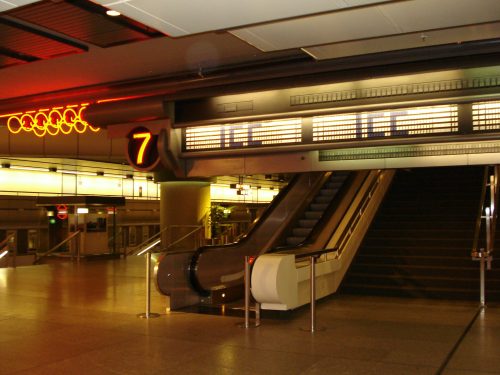 Though the art of presentation has changed through time. The Messe Berlin GmbH as the operation company of ICC has decided to construct a new congress centre, the City Cube. The international architecture competition was won by the Dresdner company Code Unique Architekten. The three storage high cubic fair of 12.000 square metres has space for 10.000 guests and opens in the beginning of 2014 – when ICC closes for renovation. It is being constructed on the historic site of the former Deutschlandhalle (1935), the building of the party congress of the NSDAP, after WW II reconstructed and used as a multi purpose arena and sports venue and demolished in december 2011.

The catchphrase of the new City Cube will be “some things make sense”, a fair and square motto. Hitherto, a rendering video has been produced, which leads the user on a voyeuristic journey through the exterior and interior qualities of the City Cube. In the present presentation of architecture, the statement of the architect has been replaced by pleasant muzak:

The difference of the two videos is striking, most importantly the pedagogic distance. Apart from the difference in technical abilities between 1979 and 2012, the difference comes out clear. Particularly shown in the drawing sequence with Schüler himself, which could be a presentation actually performed before the actual construction of ICC.

The recent video of the new congress building misses an important piece of this brilliant type of architectural representation: a voice, soft or not, and attentiveness. Apart from its structural overview, the simulated building in the video seems impersonal and flat. The presentation closes itself and seems, to a non-architect, as an informal communication between professionals. While ICC has an aim, the City Cube resembles a miniature copy of the future BER airport; a very unfortunate connotation. Without proper argumentation, showing the motivation for form and function, the City Cube could, even though not purposely, drown in this wave of failed public construction. Hopefully, it remains within its budget limits.

Through its variety of concerts and fairs, the former Deutschlandhalle had a long time ago relinquished its totalitarian past and even though being a preserved building, it was torn down. The motivation for deconstructing the old and constructing a new fair has not been manifested in the public debate. Without leading a public discussion on the original intentions of the government and analyses of the architects, the way to public acceptance of the City Cube could become a hard nut to crack.

The central question is: Why have we let ourselves cut back in the quality of architectural presentation? What architecture culture do we hereby develop? Further, what about the users and thereby interpreters of the building, who in a future perspective have to make the verdict?

Today’s architecture presentation needs some of the attentiveness of the 1970’s. The architects as well as parliamentarians also carry a responsibility to explain instead of claiming their constructions a priori make sense. When already having made the decision to construct a new fair, the present architectural presentation could learn to deliberate and integrate history. In my opinion, tearing down the physical footprints of the past, even though not the thrilling type, and constructing the present anew, could lead to an imprudent handling with architecture and more seriously, the way of perceiving history in general.

Some things just do not make sense, in particular when the rhetoric values of architecture are not taken seriously.